The service has been developed jointly between NCH&C and Central Norfolk CCGs and involves close working with health and social care providers. Our Health Improvement Practitioners (HIPs) take a health coaching approach to assist service users and have worked closely with over 150 of the most prolific attenders to A&E with the aim of identifying why they are accessing emergency services so regularly.

This joint working has resulted in funding being secured for a substantive service going forward, which has allowed the NCH&C HIU team to expand significantly.

The lead commissioner for the service, said: “There are many reasons for the successful outcomes of the service: integrated working, partnership links, having the time to listen, using a non-medical model but ultimately it is due to the skill set of the staff, their hard work, dedication and genuine care for the patients.”

Patients reported that the service had given them: 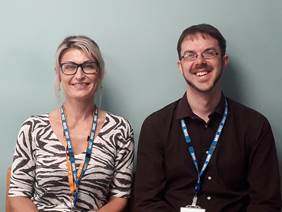 Pictured above are Tim and Rebecca, NCH&C Health Improvement Practitioners,
who have been joined by more staff to help them deliver the successful High Intensity User Service.

There is no referral into this service as each patient identified as a frequent attender of urgent and emergency services is contacted by outreach or by phone and assessed using a personalised approach. This service was commissioned using a strongly-evaluated model developed and delivered in Blackpool, and following a local yearlong pilot which included patient reported feedback.

Volunteers have been integral to the project, working with the HIPs and their patients to identify specific health goals. They have worked directly with patients to achieve goals such as improving self-care, taking up volunteering, completing forms to make a complaint and sorting out belongings following a bereavement. Volunteers in North Norfolk were nominated for the NHS Unsung Heroes Award in recognition of their fantastic work.

A service user’s story
Life for *Chris used to be lonely and chaotic. Unwell, and with no family he could stay with, Chris was regularly visiting A&E – sometimes as often as twice a week. Chris was suffering from a serious condition that often resulted in the need for hospital treatment. It was making it difficult for Chris to eat and drink which made him dizzy, and sometimes liable to falls.

Chris was often without the money to buy essentials like food. He was not claiming the right benefits and was in arrears with her rent. As someone who doesn’t like to ask for help, his social problems started to spiral and his mental health declined fast, making him more likely to end up needing to call 999.

Chris: “I was at a really low point by this time. I have always been self-sufficient and never really been the type to ask for help.”

But then Chris was referred to a Health Improvement Practitioner (HIP) working for the NCH&C Health Improvement Service. To start with his HIP thought Chris just needed help with the physical symptoms of his condition, but it soon became clear that Chris needed more than just help coordinating all his medical appointments, he also needed help getting life back on track.

HIP: “Chris knew he needed help but was overwhelmed and didn’t know how to ask or where to start. With my encouragement he has let people in so they can help stabilise his life. I can give him the time and flexibility he needs to sort out some complex problems.”

His HIP has worked with Chris to help him claim the right benefits, deal with his housing issues and even start looking for work again. Since he started working with his Health Improvement Practitioner, Chris has not visited the Emergency Department, or dialled 999.

Chris: “My HIP has got to know me really well, and has never judged me. It was good to have someone who was on my level and not against me. I feel I have come a long way.”